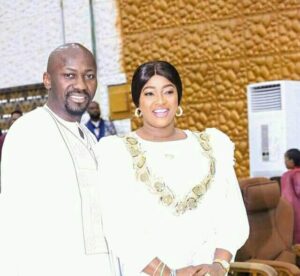 Sunday, February 6th 2022 was a day of dance, praise and unlimited joy for members of the Omega Fire Ministries (OFM) worldwide, as they celebrated the ministry’s the 18th year of spreading the gospel across the world.

For the august occasion spearheaded by the founder and senior pastor, Apostle Johnson Suleman and his beautiful wife, Reverend (Mrs.) Lizzy Suleman, all members, old and and young were beautifully dressed in different yet colourful attires. The choristers also were in their best elements as they sang out their hearts just as the church’s main auditorium was filled to the brim.

Ahead of the songs and dance, the congregation was charged into a protracted prayer session by Apostle Suleman who is fondly addressed as ‘The Restoration Apostle’ while at every interval, the congregation broke into aggressive praise and worship sessions. Along with the OFM’s partners and friends who joined in the celebration of the momentous occasion, Apostle and Reverend Lizzy Suleman who dressed elegantly in their best, later cut the cake to mark the anniversary.

As they jointly cut the giant cake, the servant of God reminisced on the journey, positing that 18 years was certainly a reason to rejoice as it means much more to him and members of the OFM given the countless lives God has touched through his leadership as well as the faithful prayers, love, sacrifice and giving.

Meanwhile, Apostle Suleman has taken his act of charity to another remarkable level. He is launching a restaurant where people of all categories will be fed for free. While announcing the new project during the OFM’s ‘Ebenezer 2022’ programme, the servant of God said “feeding the poor for free is the right way to use money rather than throwing money around.” According to him, the declaration is not just an evangelical promotional slogan, but a revelation of the heart of God and a summation of the meaning of the Christian life.

Apostle Suleman added that this kind of charity, in Christian thought, is the highest form of love, signifying the reciprocal love between God and man that is made manifest in unselfish love of one’s fellow men. “While some are out to please the desires of men, others are firm in pleasing the heavenly Father with their acts of charity,” he declared while he revealed to the congregants that it will be a 24-hour non-stop project designed to feed one thousand persons weekly at N6 million, N24 million monthly and N288 million yearly.