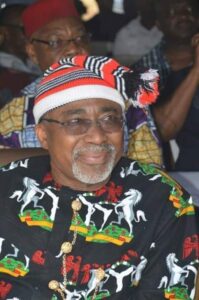 he Senate Minority Leader, Enyinnaya Abaribe on Saturday expresses worry over insecurity challenges in South East describing it as a tragedy.

Senator Abaribe who stated this in Enugu on Saturday while Speaking during the investiture of the 16th President of Enugu Chamber of Commerce, Industry, Mines and Agriculture(ECCIMA), Barr. Jasper Nduagwuike on Saturday called on Ndigbo to concentrate on making the Southeast as the economic hub of Nigeria irrespective of the outcome of their 2023 presidential quest.

He also lamented the negative effect of Mondays’ sit-at-home on the economy of the region, saying rather than achieve anything good, the exercise had ended up driving businessmen away from the region.

He urged the businessmen, industrialists and all stakeholders in the Southeast to emulate the people of Bavaria in Germany and Catalonia in Spain for jettisoning everything about ruling the countries but concentrated on making their regions economic hub of their countries.

“We want to turn the Southeast into the Catalonia of Spain, the biggest industrial area in that country. It doesn’t matter that they are seeking their own self-sufficiency.

“They still become the industrial hub of that place so that at the end, even if you are going anywhere, you are going to become a viable country.

“If you destroy your place, where are you going to be when everything is destroyed.

“We want to turn the Southeast into the Bavaria of Nigeria. Bavaria is the industrial hub of Germany today. No Bavarian has been made president of Germany because they are the people that are holding the economy.

“I want to task each and every one of us especially the chamber of commerce that our job is cut out for us,” he said.

Senator Abaribe stressed the need to make Southeast to become more attractive to businesses, adding that giving into Mondays’sit-at-home could succeed in destroying the economy of the region.