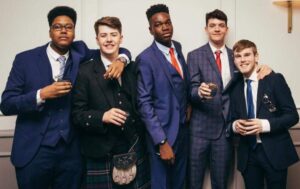 It is no longer news that fast rising Nigerian born UK based rap artist, AD3 recently dropped visuals for his latest rap music single “Nasty Drip”, which is available on YouTube, shot on location in London, precisely East London, around Canning Town and Canary wharf. The music video was directed by DI Fresh, while the audio was recorded in the studio by Sowlow.

The 22 year old Nigerian born, who attended college in the United Kingdom is an Edinburgh, Scotland based rap music sensation, rightly doing justice to music beats in the studio with his creatively versatile vocals dishing out back to back hit songs to his credit.

Who knows AD3 might be the next big thing in the UK rap music scene like the rest such as Stormzy, Dave, Bugzy Malone, AJ Tracey, Aitch, Headie One, Skepta, Giggs, Slowthai, Mist among others.

No doubt the UK have a thriving music scene with the country producing some of the world’s best artists, most of these UK artists are of Nigerian descent such as, Sade Adu, Not3s, Ms Banks, Tion Wayne, Tinie Tempah, Darkoo, Jacob Banks and many more.

However, “Nasty Drip” according to the Scottish, Nigerian descent UK based rap music artist, AD3 means swagger, especially in how you look. You’re probably hot, cool, or on point, so whatever you do fam, do your “Nasty Drip”.