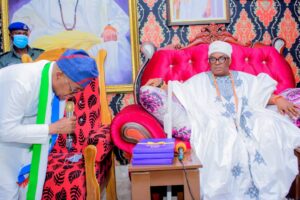 Addressing the Monarch and the people in the palace,Oyetola said he has received a nomination form purchased for him by his political associates to recontest for the second term hence his statewide consultations to prepare minds of party loyalists ahead of February 19, party’s governorship primaries.

” l am happy to be here today. As you know, our four years is coming to an end.And we deem it necessary to come for your blessings. As we are rounding off the first four years, we are ready to contest for another another term.”

He said he came to formally inform them about his intention to run for a second term in office.According to the governor, his visit was also to prepare the minds of the leaders and members of the party towards the forthcoming party primaries ahead of the governorship election.
Oyetola went ahead to talk about his achievements in the state in general and Irewole Ayedaade, Isokan local government areas in particular. Be it in health sector,infrastructure, education, security and agriculture.

Oba Afolabi praised the governor for his interest and commitment to the development and growth of the state.He applauded Oyetola for some of the developmental strides in Apomu. “We believe you can still do more for us. The road leading to Apomu is a major challenge and l am sure it will be fixed as promised by Commissioner for Works.”
Oba Afolabi wished the governor well in his journey to second term.

Secret of My Youthful Look at 63 -Quincy Ayodele