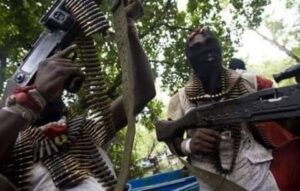 The Nigerian Army has advised “unknown gunmen” attacking communities across the country to surrender or face serious consequences.

Taoreed Lagbaja, the general officer commanding, 82 division of the army, spoke on Monday, during the launch of three new security exercises.

The exercises are ‘Golden Dawn’ for the south-east; ‘Still Water’ for four states in the Niger Delta, and ‘Enduring Peace’ for some states in the north-central and federal capital territory (FCT).

Speaking in Enugu, Lagbaja said exercise ‘Golden Dawn’ will be used to improve civil-military cooperation through the provision of boreholes, free medical outreaches, and educational materials.

He said the exercise would also reduce criminality in the south-east to “the barest minimum”.

He urged residents of the division’s area to be law-abiding and support the military with necessary information to improve safety.

“The unknown gunmen are advised to surrender their illegal arms or face the brutal force of the exercise,” he said.

“I assure them that troops for the exercise will display discipline and carry out the exercise within the ambit of the rules of engagement for internal security duties.”

Also speaking during the inauguration, Faruk Yahaya, chief of army staff, said the exercises, which would involve joint operations between the military and other security agencies, were designed to check all forms of criminality.

He said the operations would help to promote greater security for free movement of persons, especially during the end-of-year activities.

According to him, the exercises, which will run from October 4 to December 24, will create an enabling environment for socio-economic activities to thrive in all regions in the country.