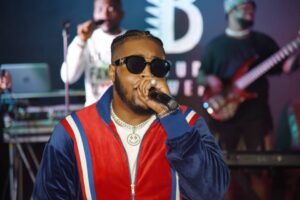 His performance was lapped up by an eclectic blend of both young and old expats and home crowd alike as the UK rapper/crooner backed by his 7 man live band belted out some of his hit singles like Aute, Faaji, Nowadays & Benz currently enjoying generous airplay on local radio and TV stations. He also performed several covers of popular hits songs.

The ace singer, who recently arrived the country, has been very busy reaching out to his fans and pushing his works as he also recently held a media meet and greet at Angel’s Hospitality in V.I. Lagos.

In a brief chat after his performance, the UK based artiste expressed his gratitude to be able to perform at home and also appreciated all the support shown him and his music promising to raise the bar as he proceeds.

Equation Billionz is managed by Quillibrium Entertainment and powered by Inspiro Productions.