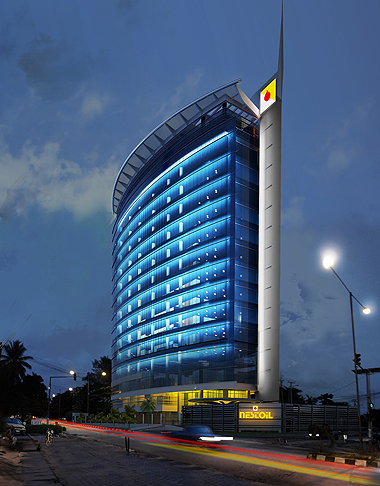 If the story of Nigerian local content will be told, the impacts of the Nestoil Group will be a recurring theme of any such discussion. This is because, since its entrance into the oil and gas sector in 1991, 19 years before the enactment of the Nigerian Oil and Gas Industry Content (NOGIC) 2010, all of its activities has been to grow the sector for the economic development of the country.

From a staff strength of about 10 persons when Nestoil started from a one-room office on Idumagbo Avenue on Lagos Island in 1991, after its founder Dr Ernest Azudialu-Obiejesi had decided to give up his trading business to chart a new course in his entrepreneurial journey – the Oil and Gas industry, it has grown into a conglomerate with more than 1,500 employees.

It would be recalled that when Azudialu-Obiejesi ventured into the Oil & gas industry, Local Content in the industry was still a fantasy. He saw the landscape move from a tranquil one to a stormy one with locals demanding more say in the mining of “black-gold”.

After nearly 20 years of literarily weathering the storm alone in an industry dominated by foreign service companies, the government finally signed the Nigeria Content Bill into law and set up the Nigeria Content Development and Monitoring Board (NCDMB) as a watchdog to enforce compliance and protect the interest of local players in the industry. This has seen the emergence of new indigenous players in the Oil and Gas ecosystem.  The Nestoil Group Chairman did not need an enabling law. He dared to thread where others had failed.

With the reputation of creating novelty from challenges and which has been passed to all staff as the company culture, it wasn’t totally a thing of shock to observers when Nestoil -through one of its strategic business units, Neconde – announced the landmark Alternative Evacuation System (AES) to combat the incessant crude oil thefts and system shutdowns caused by vandalism.

In the last 47 years, oil-producing companies have used the 200km-long Trans Forcados Pipeline (TFP) in transporting crude oil to the Forcados Oil Terminal. However, frequent shutdowns due to vandalism and oil theft as well as technical challenges on the TFP have made many producers unable to meet export targets, with some of the crudes also stolen. This is what AET was created to address. This innovation was an accidental discovery due to one of the regular system shutdowns on the TFP that almost derailed the trajectory to grow their production to 60,000 barrels of oil per day, after crossing the 50,000-mark in February 2016.

Though the repairs eventually took 16 months before the pipeline could come on stream, the combination of technology, logistics and then resilience from the team made the AET possible which kept them in business.

This could have looked impossible during the conceptualization but the doggedness of the founder that is visible from top management to the last worker has earned the Nestoil brand the ‘’King of the Swamps’’ appellation.  This came about due to past projects done exceedingly well.

One of such is the Shell Nembe-Cawthorne Channel Trunk Line Replacement Project (NCTL) project. This was the largest single pipeline construction under the SPDC Joint Ventures Asset Integrity Programme that replaced more than 1000km of deteriorated major pipelines and flowlines in Nigeria.   The 97km Package A of this project was executed by Nestoil under the leadership of Dr Azudialu-Obiejesi. This project involved major construction in a harsh mangrove swamp terrain and traversed 3 cluster communities and hundred autonomous communities in both Bayelsa and Rivers state of Nigeria. Nestoil completed this project one month ahead of schedule without a single fatality. 99 per cent of the workforce in this project were Nigerians including the Project Manager. This pipeline can evacuate about 600,000 barrels of crude oil per day.

The Shell Kolo Creek Trunk Line (KCTL) Replacement Project is another project that validates the brand’s doggedness and innovation. This project, which is a first of its kind involved a method of pipeline installation that preserves the delicate natural environment of the Niger Delta. It is well known that the Niger Delta is an incredibly well-endowed ecosystem that contains one of the highest concentrations of biodiversity in addition to supporting abundant flora and fauna and more species of freshwater fish than any ecosystem in West Africa. The fact that this pipeline was laid by Nigerian engineers without disrupting this unique environment is quite remarkable.

One project that may have thoroughly tested Nestoil’s resolve to deliver at all times is the Obiafu, Obrikom, Oben (OB3) gas pipeline. The parts of the project Nestoil is working on are the swampy areas starting from Omoku, Rivers State to Delta State. The entire area goes underwater in the rainy season hampering work on the pipeline. Part of the Nestoil scope is to cross the 48-inch diameter pipeline under the bed of the River Niger for over two kilometers. This has never been done anywhere in Nigeria but Azudialu-Obiejesi is confident that despite setbacks, Nestoil will deliver on this project sooner rather than later.

The 48-inch diameter and 67-kilometre long gas pipeline is the largest gas pipeline in Nigeria and it’s expected to boost domestic gas supply by two billion standard cubic feet per day (bscf/d) when it begins operation.

The various well-equipped SBU’s, fuelled by the local content act, were created at different fora during the evolution of the oil and gas sector, according to Azudialu-Obiejesi, upon the identification of insightful business opportunities from needs that did not have readily available or sufficient in-country solutions.

The next 30 years will surely be more interesting as the company is set to proffer more workable solutions to the economic development of the country.

Through the execution of the various projects, the expertise and technical know-how of Nestoil and its staff have greatly improved that it is trusted by IOC’s and local partners to deliver on its mandate, no matter the tough terrain where the projects are located.

After nearly 30 years of running the business, Dr Azudialu-Obiejesi believes it is time to hand over to the next generation. His shoes may appear too large to fill but he disagrees. He says he has seen enough talents within his pool of employees that are driven by uncommon passion – a restless spirit seeking answers to Nigeria’s engineering and technology challenges, especially in the Oil and Gas industry.