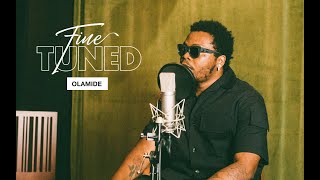 Nigerian rapper, Olamide recently performed a medley of his hit song, Julie and Rock off his last album for his Audiomack’s Fine Tuned session.

Olamide teamed up with music composer and pianist, Matt Composure for his performance of the Rock and Julie medley on Audiomack.

The video was shared via Youtube on Tuesday, the 10th of August 2021.

Olamide released his most recent album UY Scuti last month and the two songs he performed for Audiomack remain prominent among the fan favourites.

Produced by fast-rising beatsmith Eskeez, Julie serves as the fourth track on the album. The music video for the songs follows the rapper’s desire for an affectionate relationship with his lover, void of deception. The visuals, however, ends on a melancholic note. Rock which was dropped as the lead single on the album also has a video and was produced by the same Eskeez.

Olamide who is on a promo tour in the US has been on different platforms, just like how he performed the Rock and Julie medley for Audiomack. He also spoke with Apple Music recently about wanting a change being the reason for creating his UY Scuti album.

This time around, I’m just switching the gears and moving it up a notch, a little bit. I’ve always wanted to tap into different elements of everything I feel on the inside and just live my life to the fullest. So, I might as well just try something new entirely.

Bandits kill one, abduct several others in Sokoto

Fani Kayode dines at the home of Pantami, who he once called a terrorist