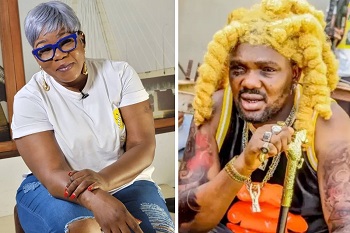 Yomi Fabiyi has been accused of making a movie about Baba Ijesha’s r*pe case while using the real names of the persons involved in the r*pe saga.

Yomi Fabiyi made the movie look like the minor involved in the rape case was having an affair with Baba Ijesha.

His movie has caused a lot of stir on social media. Yomi has however garnered several heavy backlashes for producing a movie with a sensitive issue at hand. Actress Ada Ameh has also weighed on the issue.

”@iyaboojofespris I fall In love with you every day!! Thanks a million for everything you have said 🙏 this stupid idiot mumu goat of man will soon meet his Waterloo!! And that movie of his God will judge him. He failed even before he started that I know, you can not use somebody’s predicament to make money its obvious that he is cheap &has no moral value!! That goat 🐐 should be taking to a mental hospital, he is sick truly. No normal person will do this, even when he calmed he was standing by his friend (baba ijesha) &he his using his problem to laugh at him!! All in the name of am doing film orori buruku ni yomi😡😡😡”