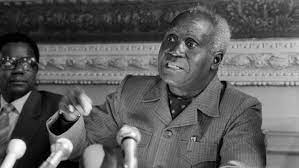 Former Zambian President and independence leader Kenneth Kaunda has died at the age of 97.

His death was confirmed by Zambia’s current President Edgar Chagwa Lungu, who said in a Facebook post today:

“I learnt of your passing this afternoon with great sadness. On behalf of the entire nation and on my own behalf I pray that the entire Kaunda family is comforted as we mourn our First President and true African icon,” the President added.

Kaunda was Zambia’s first president following the southern African country’s independence from Britain. He ruled from 1964 until 1991 and is known as one of the giants in the continent’s fight against colonialism.