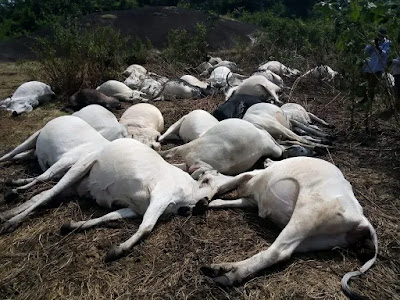 Though the cause of the death of the cows is still unknown, residents of the community have become apprehensive following the discovery of the dead cows.

It was gathered that the incident happened on Monday night at the Ibaka area of the community where the state-owned Adekunle Ajasin University is located.

A similar incident had occurred in the state in 2019 where 36 cows were killed by lightning in Ijare community, Ifedore Local Government Area of the state.

According to an eyewitness in Akungba, Asiwaju Ojumo, the cows were seen falling without any clue as to what was killing them.

Meanwhile, residents of the community have been advised against buying or eating meat from unknown sources for the time being.