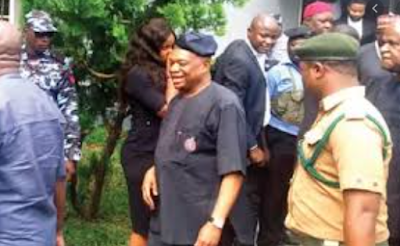 The Chief Whip of the Senate, Orji Kalu, has claimed he was jailed from preventing him to become the President come 2023.

He said he was imprisoned because there were people worried that he would be Nigeria’s next president.

Mr Kalu stated this in a statement on Tuesday, adding that going to prison is a good experience for him.

The statement quoted Kalu to have said that his detractors were “little-minded to think he is ashamed of his prison experience.

“My conspirators thought I would be president in 2023, so they decided to cut my journey short at all cost.

“But you see, these people are not God. They think I am ashamed to have gone to prison.

“I am not, and I don’t blame them because they don’t know my relationship with God.

“My going to prison is part of my life script, and I am thankful God allowed it.

“They are little minds and wicked people who have refused to do any project for their own people.”

However, the Supreme Court on May 8, 2020, upturned his trial and conviction by Justice Muhammed Idris of the Federal High Court in Lagos.

The apex court had said Idris lacked the jurisdiction to try the matter, having been elevated to the Court of Appeal.

According to the statement by his Media Aide, Peter Eze, some prominent Abia politicians, who were vexed by Kalu’s scathing criticism against the state government, accused him of still suffering from his prison experience.