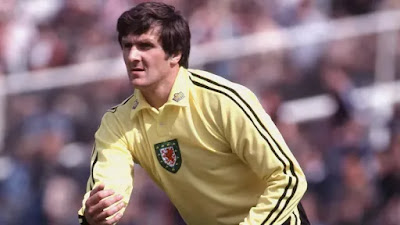 Former Wales goalkeeper Dai Davies has died at the age of 72.

He had been in a hospice after being diagnosed with cancer.

Davies was at one stage Wales’ most-capped keeper, making 52 appearances for his country over a seven-year period.

His career spanned 17 years, starting at Swansea City, before moving on to Everton, Tranmere Rovers, Bangor City and Wrexham, where he ended his career in his second spell with the club.

“Dai was a great goalkeeper but also a wonderful human being with a beautiful soul,” his wife Judy said in a family statement.

“Ever the gentleman Dai had time for everyone and was hugely respected and much loved by so many.”

“It is with great sadness that we announce the death of William David Davies (better known as Dai) today, Wednesday 10 February 2021. He died peacefully at home.

“He was much loved by Judy, Bethan, Gareth, Rhian, Emma, Sally, Kate and his 12 grandchildren. He will live on in the memories we, and many others, hold dear.

“In his last few months, the kindness and support he, and us, have received from our friends and the staff at Nightingale House Hospice has been wonderful, and we thank them all.

“As we do the staff who cared for him at both The Maelor Hospital Wrexham and The Royal Hospital in Liverpool.”