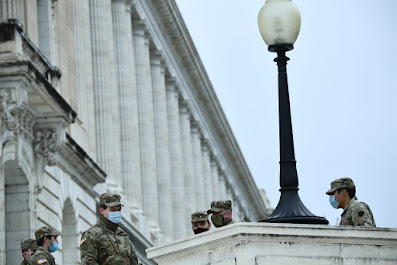 Third US lawmaker contracts COVID-19 after Capitol invasion. A third Democratic member of the US Congress tested positive for Covid-19 on Tuesday and lashed out at Republicans who refused to wear masks while lawmakers were sheltering from a pro-Trump mob that rampaged through the Capitol last week.

“After narrowly escaping a violent mob incited by President Donald Trump to attack the Capitol and its occupants, I was forced to spend several hours in a secure but confined location with dozens of other Members of Congress,” Representative Brad Schneider of Illinois said in a statement.

“Several Republican lawmakers in the room adamantly refused to wear a mask… even when politely asked by their colleagues,” Schneider said.

“I am now in strict isolation, worried that I have risked my wife’s health and angry at the selfishness and arrogance of the anti-maskers who put their own contempt and disregard for decency ahead of the health and safety of their colleagues and our staff.”

Schneider warned against turning mask-wearing into a political rather than public health issue, adding that it was a gesture of “common courtesy” to put one on.

Two other Democratic representatives who were in the secure room — Pramila Jayapal of Washington state and Bonnie Watson Coleman, a 75-year-old cancer survivor from New Jersey — have also tested positive for the coronavirus.