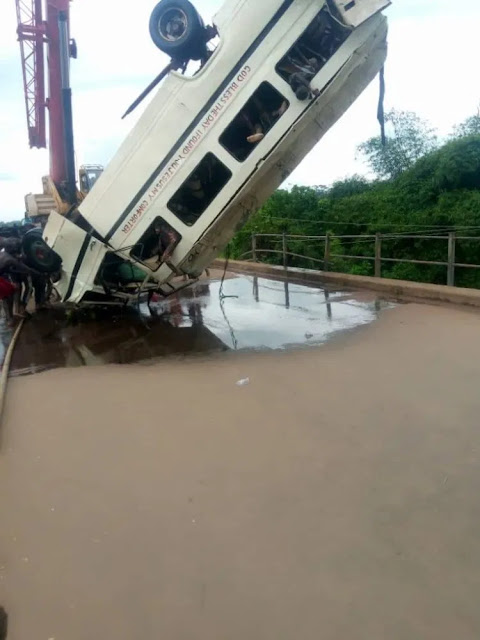 #Breaking!!! FRSC recovers 14 Corpses as Commuter Bus bus falls into Ebonyi river {photos}. The Federal Road Safety Corps (FRSC) in Ebonyi has confirmed the retrieval of 14 corpses from the Akeze-Ukwu river after a Mercedes Benz 608 model bus plunged into it yesterday evening.

The bus was conveying members of a particular church who attended their pastor’s burial and were returning to Enugu when the incident happened.

The bus driver was said to have lost control of the vehicle while trying to overtake an articulated vehicle on the bridge but five victims were rescued unconscious on Friday.

Mrs. Stella Uchegbu, FRSC Sector Commander in Ebonyi, on Saturday, said that the bus had been retrieved with 14 persons aboard.

“Seven males and seven females, all adults were inside the vehicle all and they were all dead.

“Their corpses have been deposited at the Mater Misericordae Hospital, Afikpo, but both professional divers from Port Harcourt and the local ones are still searching for more victims,” she said.

Uchegbu said that with five persons rescued on Friday and 14 corpses retrieved on Saturday, it was clear that there more victims still missing.

“The total of 19 persons has been recovered so far as against the expected 32 passengers on board the bus, at the time of the accident.

“The FRSC personnel are still on ground, maintaining the free flow of traffic with the road cordoned to motorists since Friday,” she said.