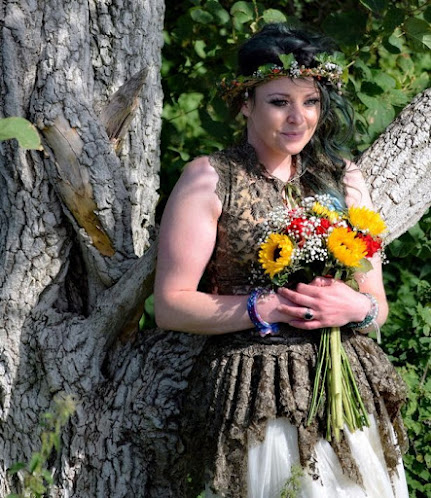 Speechless! Lady,38, Married to Tree Celebrates One year Anniversary. 38-year-old Cunningham, said it was one of the best decisions she has ever made when she married the tree at Rimrose Valley Country Park in Sefton, Merseyside in September last year.

She celebrated her first year of marriage with two friends and some elderflower champers.

She said: “Trees will always come first. They do keep us alive.”

“Despite causing a little bit of embarrassment for my 15-year-old, he sees the bigger picture now and understands what it’s for.

“It’s something which has made me feel a bit more confident about myself. I don’t care about what anyone else says. “Marrying the tree has given me a new purpose.

“I’ve changed my name to Elder. So even that gives me a whole new feeling. It fits in with married life as well, I feel like a changed person.”

The ceremony was attended by dozens and the local musician and poet Davy Edge performed.