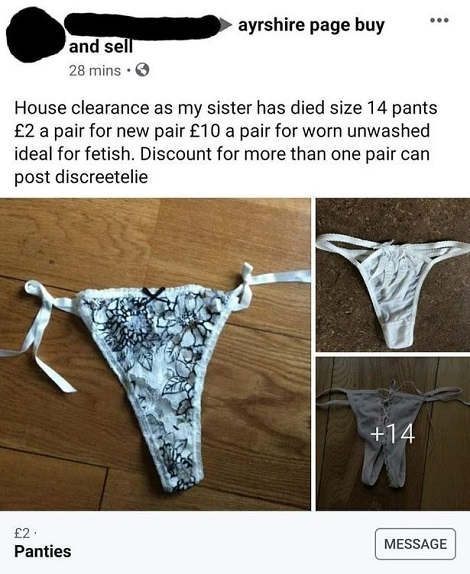 Shocking!!! Man sells Late Sister’s Unwashed Panties on Facebook. A man has sparked fury on social media after he tried to sell unwashed knickers belonging to his dead sister.

The shameless seller from Ayrshire, who has not been identified, shared more than a dozen pictures of frilly thongs and knickers in a Facebook buy and sell group this week.

He claimed they belonged to his sister who died and would be prepared to sell the unwashed undies for £10 a pair and that they were ‘ideal’ for those with a fetish, Daily Record reports.

While those looking for clean undies would be charged £2.

Included in the distasteful snaps was a pair of crotchless panties. It is unclear if they were clean or dirty.

The advert read: “House clearance as my sister has died size 14 pants £2 a pair for new £10 a pair for worn unwashed ideal for fetish.

“Discount for more than one pair can post discreetelie (sic).”

Another joked: “How much for 12 pairs worn? Asking for a friend.”

While a third said: “It’s not worth it. There’s no strings attached.”