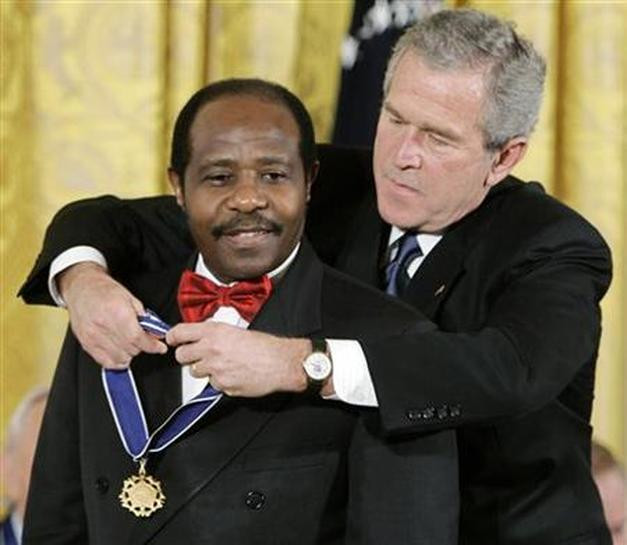 #Update! Hotel Rwanda Hero was Lured to #Rwanda, not #Kidnapped from #Dubai – #Kagame. Rwanda’s President Paul Kagame has denied that the man who inspired a Hollywood film about the country’s 1994 genocide was kidnapped in Dubai and brought back to the country before being arrested for murder and terrorism.

This comes after Paul Rusesabagina’s family alleged that he was abducted while in Dubai and taken to Rwanda against his will last week.

“He would never go to Rwanda of his own will because of the way the Rwandan government has been attacking him,” Anaïse Kanimba, one of his daughters, told the Financial Times last week

“Paul did not voluntarily come to Rwanda and no extradition process was followed,” said a spokesperson for the Hotel Rwanda Rusesabagina Foundation.

#Update! Hotel Rwanda Hero was Lured to #Rwanda, not #Kidnapped from #Dubai – #Kagame

Reacting to the claims, President Paul Kagame on Sunday  September 6, said Paul Rusesabagina had “brought himself” in.

“Let me eliminate the one [theory] of him being kidnapped. That was not the case. And Rusesabagina can attest that himself. There was no kidnap, there was not any wrongdoing in the process of his getting here. He got here on the basis of what he believed and wanted to do,” Mr Kagame told journalists. The process was “flawless”, he added.

Paul Rusesabagina, who became well known after Hotel Rwanda,  was arrested last week on charges that include terrorism, kidnap, and murder.

The 66-year-old who has not lived in Rwanda since 1996 when he survived an assassination attempt, is said to be the founder of the National Liberation Forces (FLN), ”an armed terrorist organisation” under his Rwandan Movement for Democratic Change (MRCD).

The country’s bureau of Investigation said Rusesabagina was arrested “through international cooperation” after an international warrant was issued.

Rwandan authorities believe the role of Mr. Rusesabagina in the country’s genocide was exaggerated.

The 2004 film Hotel Rwanda told the story of how Mr. Rusesabagina, a middle-class Hutu native used his influence and bribes to convince military officials to secure a safe escape for an estimated 1,200 people who sought shelter at the Mille Collines Hotel in Kigali during the genocide, in which about 800,000 Tutsis and moderate Hutus were killed.

#Update! Hotel Rwanda Hero was Lured to #Rwanda, not #Kidnapped from #Dubai – #Kagame

Paul Rusesabagina is a recipient of several human rights awards for his efforts during the genocide, including the US Presidential Medal of Freedom in 2005.