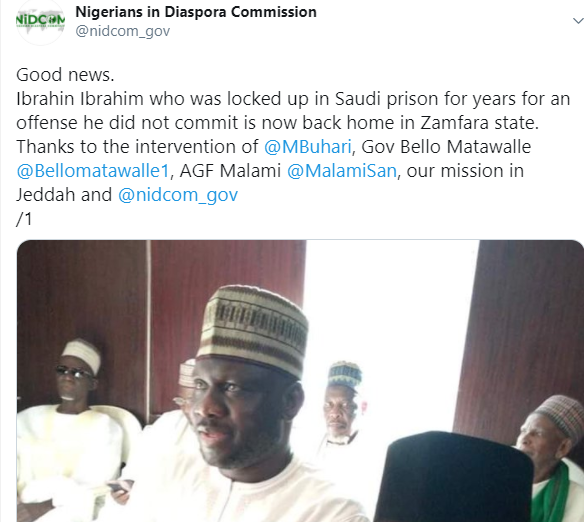 #Matawalle appoints #Cleric freed from #Death Sentence as SSA. Governor Bello Matawalle has appointed Hafeez Ibrahim, the Islamic cleric who was freed from a death sentence in Saudi Arabia as one of his senior special assistants, Nigerianjournal reports .

Mr Ibrahim, a Quranic memoriser had faced the death penalty in Saudi Arabia after he was wrongly charged with drug trafficking. The Zamfara state indigene was in Saudi Arabia to perform the lesser Hajj but was arrested by the police shortly after he lodged in his hotel room. He was charged with drug trafficking following a bag full of banned substance linked to his passport details.

However after Governor Matawalle employed a team of Saudi lawyers for Ibrahim who proved to the court that the said bag did not belong to Hafeez Ibrahim, he was acquitted but could not return home due to restriction on international flights as a result of COVID-19.

Nigerians in Diaspora Commission (NIDCOM) who acknowledged the Islamic cleric’s return to the country, had tweeted;

Good news. Ibrahin Ibrahim who was locked up in Saudi prison for years for an offense he did not commit is now back home in Zamfara state. Thanks to the intervention of @MBuhari, Gov Bello Matawalle @Bellomatawalle1, AGF Malami @MalamiSan , our mission in Jeddah and @nidcom_gov.

NiDCOM Legal director, Barrister Bello who was in the delegation to Saudi Arabia We welcome him home as he is being received by the Zamfara State Government

Governor Matawalle’s spokesperson Zailani Bappa in a statement released on Wednesday September 2, said Ibrahim’s family “had their hearts in their mouths for nearly four years as their loved one cooled his feet in a Saudi Arabia gaol awaiting death sentence.” He also confirmed the cleric’s appointment as the Governor’s aide.