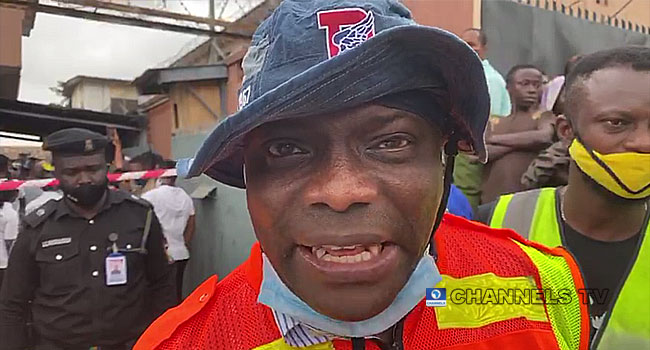 #Crashed Helicopter: AIB Begins Investigation, Recovers BlackBox. The Accident Investigation Bureau (AIB) has recovered the BlackBox of the helicopter that crashed into a residential building in Lagos State on Friday.

Officials of the Lagos State Emergency Management Agency (LASEMA) are moving the wreckage from the scene of the incident as an investigation into the crash begins.

While confirming the incident, the Director-General of LASEMA, Dr Femi Osanyintolu disclosed that two persons died from the crash with one other critically wounded.

“At about 12noon, we received a distress call in our command and control centre that there was a helicopter mishap and immediately we activated the Lagos state emergency response team,” he explained.

“We were able to rescue one person alive and he has been transferred to the Lagos State Teaching Hospital where he is receiving adequate treatment, but it is pertinent to note that we recovered two bodies and they have been deposited at the mortuary.

“Based on the investigation carried out, it was due to the impact that led to their mortalities.”

Dr Osanyintolu stressed that people on the ground were not affected by the crash.

The helicopter, a Bell 206, with registration number 5N BQW belongs to Quorum Aviation and came in from Port Harcourt, the Rivers state capital with two crew members and a passenger.

An eyewitness identified as Adepeju Johnson narrated that she was in her residence when she heard the noise from the helicopter blades but was not sure what it was.

At first, Adepeju thought it was about to rain but moments later, she saw some thick black smoke and heard a loud noise between her building and that of her daughter-in-law.

“This one landed where it was least expected,” she said.  “Unfortunately, the helicopter was between my house and my daughter-in-law’s house.

“There was a big sound I’ve never heard in my life, there was thick smoke, but there was no fire. All I have to do is to thank God because it did not land on the roof.”