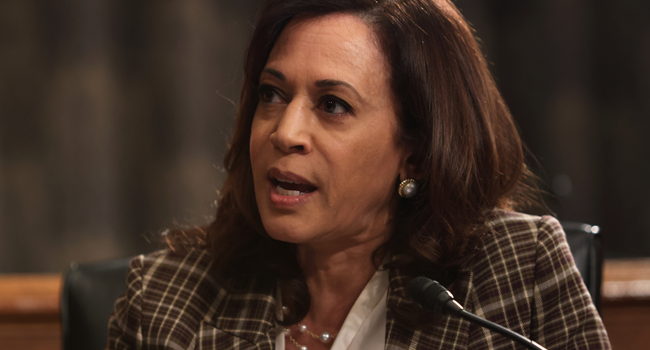 Biden announces Kamala Harris US senator as Running mate. Joe Biden on Tuesday named Kamala Harris, a black US senator from California, as his choice for vice president, capping a months-long search for a Democratic partner to challenge President Donald Trump in November.

“I have the great honor to announce that I’ve picked @KamalaHarris — a fearless fighter for the little guy, and one of the country’s finest public servants — as my running mate,” Biden, 77, said on Twitter.

His team stated that the two Democrats will deliver remarks on Wednesday in Wilmington, Delaware as they kick off their campaign to defeat the Republican Trump.

Taking to Twitter shortly after the announcement, Harris said she was “honored” to join Biden as nominee for vice president, and would “do what it takes to make him our Commander-in-Chief.”

“@JoeBiden can unify the American people because he’s spent his life fighting for us. And as president, he’ll build an America that lives up to our ideals,” she wrote.

For Harris, being elevated onto a Democratic presidential ticket is the political moment of a lifetime. And if they win, the 55-year-old Californian becomes the automatic frontrunner in the race for the 2024 or 2028 Democratic nomination.

Harris has been a barrier-breaker for much of her political career.

Her parents were immigrants to the United States — her father from Jamaica, her mother from India. She was the first black woman elected as California’s attorney general, and only the second black woman, and the first woman of South Asian heritage to be elected to the US Senate.

Biden’s team stated that the two Democrats will deliver remarks Wednesday in Wilmington, Delaware as they kick off their joint campaign.

Harris had clashed with Biden during the first Democratic debate of the 2020 race, chiding the former senator over his opposition to 1970s busing programs that forced integration of segregated schools.

It provided her with a breakout moment which proved short-lived: Harris dropped out of the race in December 2019 and endorsed Biden in March.

Despite their debate clash, Biden has made it clear he does not hold a grudge, describing Harris as a “first-rate intellect, a first-rate candidate and a real competitor.”

The Republican National Committee swiftly reacted to the announcement, saying Harris has “extreme” political positions that are far more leftist than the more moderate Biden’s.

A career of firsts

Harris has been a trailblazer all her life.

“My mother used to have a saying,” the 55-year-old Harris is fond of recounting. “She would say to me ‘You may be the first to do many things but make sure you’re not the last.’”

She is now seeking to become the first female vice president of the United States.

And with the 77-year-Biden expected to serve only a single term if elected, Harris would be favored to win the Democratic presidential nomination four years from now.

That could give her a shot at more history-making — as the first female president of the United States.

“Senator Harris is a tenacious and trailblazing leader who will make a great partner on the campaign trail,” said Susan Rice, who served as national security advisor under president Barack Obama and was also under consideration to be Biden’s running mate.

Since ending her White House run and endorsing Biden, Harris has stepped up her criticism of President Donald Trump on a host of issues — from his handling of the COVID-19 outbreak to race to immigration.

“Trump’s repeated racist rhetoric tries to place blame for his coronavirus failures on anyone but himself,” she tweeted recently.

“It’s dangerous and it’s wrong — and has real life consequences for Asian Americans and Asian immigrants.”

Harris’s own parents were immigrants to the United States — her father from Jamaica, her mother from India — and their lives and her own have in some ways embodied the American dream.

Her father, Donald Harris, was an economics professor and her mother Shyamala Gopalan, was a breast cancer researcher.

Her parents separated when Harris was about five years old and she and her sister Maya were raised by her mother, who died in 2009.

Harris earned her undergraduate degree at historically black Howard University in Washington and is a proud member of “Alpha Kappa Alpha,” the oldest African-American sorority.

She earned her law degree from the University of California, Hastings College of Law, became a prosecutor and served two terms as a district attorney in San Francisco.

She was elected attorney general of California in 2010 and re-elected in 2014, the same year she married Douglas Emhoff, a lawyer with two children from a previous marriage.

As attorney general, Harris developed a working relationship with Biden’s late son Beau, who held the same position in the state of Delaware. Beau Biden died of cancer in 2015.

Her failure, however, to enact bold criminal justice reforms while attorney general dogged her presidential campaign and did not sit well with many black voters during the primaries.

Harris was elected to the Senate in November 2016, becoming just the second black female senator ever.

As a senator, she has employed tough questioning skills honed as a prosecutor, notably during the Senate confirmation hearing of Supreme Court justice nominee Brett Kavanaugh.

‘That little girl was me’

Harris launched her campaign for the Democratic presidential nomination on Martin Luther King Jr’s birthday in January 2019 at an event attended by 20,000 people in Oakland.

She clashed with Biden during the first Democratic debate, chiding the former senator over his opposition to 1970s busing programs that forced integration of segregated schools.

“There was a little girl in California who was part of the second class to integrate her public school, and she was bused to school every day,” she said. “And that little girl was me.”

It provided her with a breakout moment and a bump in the polls but it was to prove short-lived. Harris dropped out of the race in December 2019 and endorsed Biden in March.

Despite their debate clash, Biden has made it clear he does not hold a grudge, describing Harris as a “first-rate intellect, a first-rate candidate and a real competitor.”

Harris voted for Trump’s impeachment at his Senate trial and to defeat him she has invoked the need to rebuild the “Obama coalition” — African Americans, Hispanics, women, independents and millennials

A tireless campaigner, Harris has a knack for personal connection and a steely demeanor that can give way to a million-watt smile.

Along with her experience in the judicial, executive and legislative branches of government, Harris is expected to provide a jolt of energy to a White House campaign overshadowed by the coronavirus and economic crisis.