Real Madrid are reportedly ready to part with one of their stars in order to sign Juventus attacker Paulo Dybala. 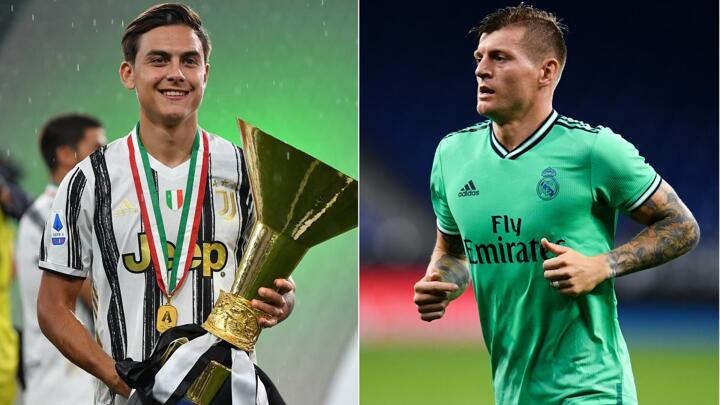 Could Paulo Dybala swap Italy for Spain? The Juventus attacker was close to leaving Juventus for either Manchester United or Tottenham prior to the 2019-20 season, while Paris Saint-Germain were also linked.

Real Madrid are set to offer Toni Kroos or Isco as part of a deal to bring Juventus star Paulo Dybala to the Santiago Bernabeu, according to SportMediaset.

LaLiga champions Madrid are eyeing a move for Dybala, who has been in negotiations with Serie A titleholders Juve over a new contract amid reported interest from Paris Saint-Germain.

However, Juve are unwilling to part with the Argentina international – who enjoyed a fine Serie A campaign prior to Maurizio Sarri’s sacking as he looks ahead to life under Andrea Pirlo.

Rest of the transfer rumours

– Kicker claims Jadon Sancho has told Borussia Dortmund he is happy to stay at the club if a blockbuster transfer to Manchester United fails to materialise. The England international has been heavily tipped to join United, with personal terms reportedly agreed.

– Barcelona want to sign Manchester City star Bernardo Silva, reports The Telegraph. The LaLiga giants are eyeing a cash-plus-player deal to try to prise the Portugal international to Camp Nou.

– Premier League champions Liverpool are poised to sign Olympiacos left-back Kostas Tsimikas, according to widespread reports. Having failed to strike a deal with Norwich City for Jamal Lewis, Liverpool are close to prising Tsimikas from the Greek powerhouse. Meanwhile, The Sun says Jürgen Klopp’s Liverpool are targeting a shock £35million swoop for Bournemouth midfielder David Brooks.

– Napoli have joined the race to sign Madrid full-back Sergio Reguilon claims Sky Sport Italia. On loan at Sevilla, Reguilón has been linked to Chelsea and Everton.

– According to Calciomercato, Inter are interested in Tottenham midfielder Tanguy Ndombele. However, salary demands may prove problematic amid talk of a swap deal involving Inter defender Milan Skriniar.