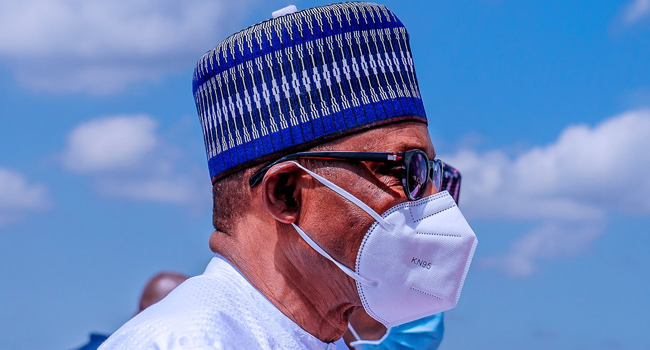 PMB arrives Mali fully masked on a peaceful political mission. President Muhammadu Buhari has arrived in Mali on a one-day visit aimed at finding a political solution to the crisis in the country.

The President’s arrival was confirmed in a tweet by his personal assistant on new media, Mr Bashir Ahmad.

According to an earlier statement by the Special Adviser on Media and Publicity to the President, Femi Adesina, Buhari’s planned visit followed the briefing by the ECOWAS Special Envoy to the country, former President Goodluck Jonathan.

The statement adds that President Buhari and the ECOWAS Chairman, President Issoufou Mahamadou of Niger Republic had already agreed to meet in Mali to engage in further consultations towards finding a political solution to the crisis in the country.

The two leaders are expected to be joined by the Host President, Ibrahim Boubacar Keita and Presidents Machy Sall of Senegal, Nana Akufo-Addo of Ghana and Alassane Ouattara of Cote d’Ivoire respectively.

The arrival of President @MBuhari in Bamako. He is in Mali with some ECOWAS leaders led by President Mahamadou Issoufou of Niger Republic, as they agreed to meet there to engage in further consultations towards finding a political solution to the crisis in the country. pic.twitter.com/qzblArbaRE

“We will ask the President of Niger, who is the Chairman of ECOWAS to brief us as a group, and we will then know the way forward,” President Buhari was quoted as saying.