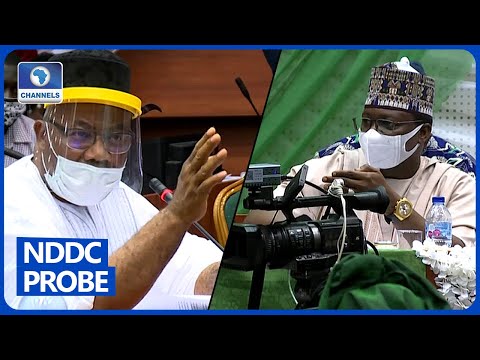 #NDDCSAGA: 2 Chairmen ov the probing committee know the Lawmakers that received contracts – Akpabio.Minister of Niger Delta Affairs, Sen. Godswill Akpabio, on Thursday, insisted that the two chairmen of the committee probing the Niger Delta Development Commission (NDDC), know the lawmakers who received most of the contracts given out by the commission.

This claim was embedded in a letter written by Akpabio, sent to the Green Chambers, and read on the floor by the Speaker, Mr. Femi Gbajabiamila.

Mr Akpabio also said he never referred to members of the 9th assembly as beneficiaries of the NDDC contracts.

The minister further stated that in the 2019 budget there are 19 old contracts amounting to 9 billion naira which the House of Reps chairman on NDDC insisted that the IMC must pay.

Senator Akpabio, however, stressed that he will not make the documents public.

After having the letter read on the floor of the House, the letter was handed to the committee on ethics and privileges for further examination.

Akpabio’s letter came few minutes after the House of Representatives resolved to institute a legal suit against the minister, following the expiration of a 48-hour ultimatum.

On Tuesday, the House issued an ultimatum to the minister to publish the names of lawmakers whom he claimed had received contracts from the Niger DeltaDevelopment Commission (NDDC).

The clerk has been directed to issue a criminal complaint of perjury and civil defamation suit against Mr. Akpabio.

Meanwhile, the Senate ad-hoc committee investigating financial recklessness in the NDDC has concluded its investigation and has presented its report before the Senate.

In the report read by the committee chairman Senator Olubunmi Adetunmbi, he said the NDDC spent 1.3 trillion Naira between 2015 and May 31st, 2019.

Many of these expenses he said contravened the law and were extra-budgetary.

He said the committee observed process errors and infractions, as well as substantial payments, were made to staff in the form of unjustifiable allowances.

Curiously, the payment for overseas travel and scholarship was during the lockdown and cessation of flights abroad.

The committee also observed that the ministry of Niger delta is culpable if negligent supervision of the NDDC.