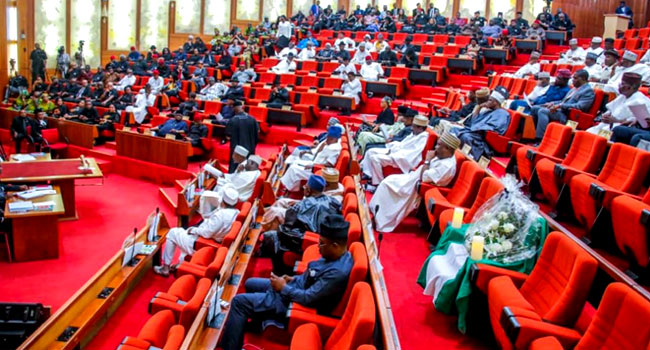 #INSECURITY: Senate Asks Nigeria Service Chiefs To Step Aside.The Senate has called on Nigeria’s service chiefs to step aside as the country continues to grapple with security challenges.

In reaction to the motion by Senator Ali Ndume, the Senators made the call on Tuesday during plenary.

Ndume who moved his motion on the back of the recent ambush of soldiers in Katsina and the alleged voluntary resignation of many soldiers.

According to the Senator, both developments and others are worrying.

Despite his concerns about the security situation, Senator Ndume did not call for the dismissal of the service chiefs, neither did he demand that they should step aside.

The call for them to step aside was made following an additional prayer to his motion in the course of deliberations.

Senator Francis Fadahunsi made the call for the service chiefs to step aside as part of his contributions to the discourse on the motion.

Other senators okayed the move and passed the resolution for the service chiefs who have been in office since July 2015 to step aside.

The Senators also mandated a joint defence, army, navy, airforce, police and interior committee to engage with the military to ascertain the state of affairs of the armed forces.

If the trend continues, Senator Ndume expects that there will be dire consequences for the country.

Over the last few years, and as Nigeria struggled to end the Boko Haram insurgency, fight banditry, kidnapping, and several security challenges, the service chiefs have faced heavy criticism.

There have also been several calls from different quarters for their removal including from lawmakers.

Under the 8th Assembly, there were repeated calls for a shakeup of the nation’s security setup including the removal of the service chief.

The 9th Assembly has also not spared them of criticism. President Muhammadu Buhari, has, however, opted against showing them the door, a move that has also been criticised by the opposition and several prominent Nigerians.

In June, amid outrage over an upsurge in attacks by bandits in several parts of the country, especially in the North West and the President’s state Katsina, the President warned the service chiefs that excuses will no longer be tolerated