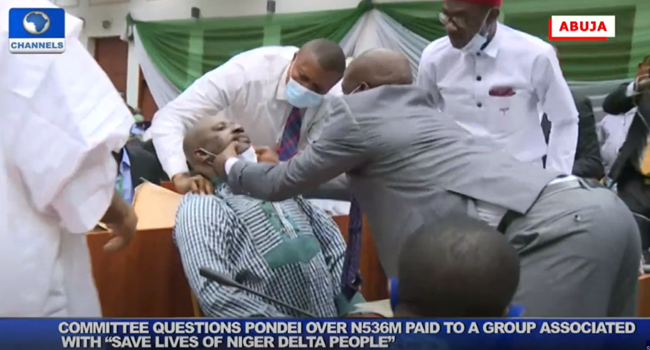 COVID-19: Contrary to reports, NDDC spent N1.32Bn on Palliatives not N1.5Bn – Pondei.Professor Kemebradikumo Pondei, the acting Managing Director of the Niger Delta Development Commission (NDDC), has said that contrary to reports that the commission spent N1.5 billion on COVID-19 palliatives, the NDDC only spent N1.32billion.

The acting MD of the NDDC stated this on Monday at the resumed hearing of probes into the operations of the commission by the House of Representatives.

Pondei had in a previous hearing told the lawmakers that the commission spent only N1.5 billion as palliatives for taking care of NDDC staff, but in his latest appearance before the panel, the NDDC boss said he must have not been paying attention when he made the previous declaration.

According to the NDDC chief, the N1.5billion “take care of ourselves” clause which he stated about two weeks ago, was uttered out of anger.

He said, “If I had said take care of ourselves, I must have said that in anger,” Professor Pondei told the lawmakers at the hearing.

The acting MD of the NDDC also answered questions regarding unpaid scholarships, saying he did not hand out any bursary.

He said the commission processed scholarships for the students, went to various universities for verifications after which letters were drafted and estacodes were prepared.

Pondei stressed that the preparation of estacodes began before he joined the NDDC and as such, the procedures for payment were not laid down by his administration.

The MD assured that at the moment the NDDC has commenced processing of payments. He added that within the week, all scholarship backlogs from 2016 will be cleared.

The hearing was brought to an abrupt break after Mr. Pondei appeared to have slumped over his desk, causing palpable panic.

Some lawmakers and representatives from the NDDC rushed to give him first aid, a man held open his mouth as others held him sit upright.

After he appeared to regain and lose composure intermittently, he was moved out of the session.