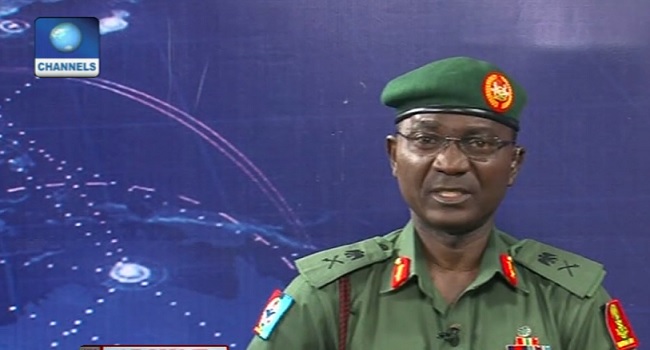 The Coordinator of Defence Media Operations, Major General John Enenche, explained in a statement on Sunday that it was in furtherance of the operational mandate to decisively stamp banditry out of the North-West region.

He disclosed that the soldiers conducted the operation on Saturday following credible intelligence that armed bandits have rustled unconfirmed number of cows around Daki Takwas and Tashar Kuturu in Anka and Talata Mafara Local Government Areas (LGAs) of Zamfara State.

Enenche said troops tactically deployed to the scene and contact was made with the armed bandits.

“The determined troops overwhelmed the recalcitrant bandits with superior fire.

“During the encounter, scores were neutralised while others escaped with gun shots wounds,” the statement said.

According to the military spokesman, the troops successfully recovered 302 rustled cows and 412 sheep.

They also recovered one empty magazine and five mobile phones from the bandits.

He noted that efforts were ongoing to hand over the rustled animals to the owners.

“Also two other kidnapped victims were rescued by own troops at Yayi village in Sabon Birni LGA of Sokoto State.

“The victims on interrogation stated that they were kidnapped on 1 June 2020. All the victims have been handed over to the Sokoto State Government.

“Relatedly on 10 July 2020 while on patrol, troops arrested five members of Yan Sakai group and a gun fabricator along Maga- Kyabu-Tadurga village road.

“Items recovered include one motorcycle, 10 dane guns, one catarpult and one knife. Others were one saw,16 plugs, one axe and three mobile phones.

“The Military High Command has commended the troops for their dedication and unwavering commitment and urges them to remain committed and sustain the onslaught against the enemies of our country.”