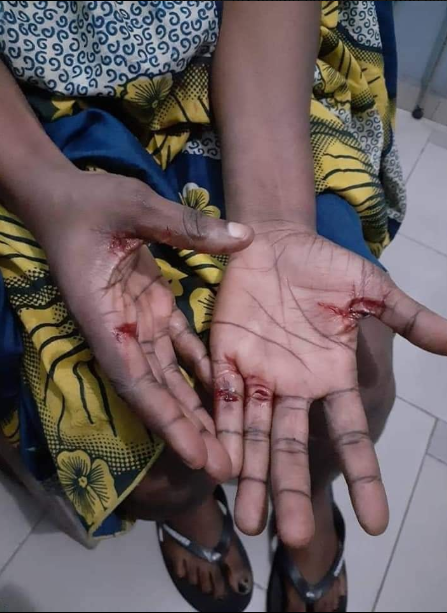 Lady recounts how her gateman attacked her family, strangled her, demands N30 million. A woman is lucky to be alive after her gateman conspired with criminals to attack her and her kids when her husband was away on business.

Ifeoma Ibeneme Nwokeoma explained that she had gone out with her kids. When they got home, as she drove into the compound and got out of the car, three armed men with cutlasses attacked them, forced them into the house and started torturing her as they forced her to produce 30 million Naira.

She said each time she told them she didn’t have the money, they cut her with the cutlass. She added that they also asked for her PIN and tried to make transfers from her mobile bank app.

At this point, her husband felt something was wrong and sent people to the house.

Lady recounts how her gateman attacked her family, strangled her , demands N30 million

On hearing neighbours banging on the gate, the criminals allegedly became desperate and strangled the woman with a rope until they thought she was dead. Fortunately, the woman regained consciousness after they left and she ran to check on her kids, one suffered a cutlass wound but they were safe.

Sharing photos of her injuries, she wrote:

I have come with a heart filled with thanksgiving to the king of kings, the giver of life, for showing me and my household mercy and delivering us from heartless armed men.

On Saturday, the 4the of July 2020, my husband had travelled for work. So I was home alone with my girls. We had gone to visit my younger sister and came back at about 7pm. Sadly, unknown to me, my gateman whom I showed nothing but love had connived with his gang members and laid ambush in the compound to attack us .

The moment I drove into the compound, he rushed to start the generator, on coming out of the car and proceeding to the house with my kids, these three armed men with long and short sparkly cutlasses came out from the back of the building and attacked us, me particularly. God removed their attention from my children. They threatened them not make noise and locked them in their room.

They tortured me with all those arms they came with, asking for 30million naira. I was like who keeps 30 million naira in the house.
Each time they asked for money and didn’t get a favourable response from me , they beat, punched the hell out of me. They kept using their leg to smash my head and promised to kill me that night if I didn’t give them 30 million naira.

Lady recounts how her gateman attacked her family, strangled her with rope, demands N30 million

They took my ATM cards and asked for the pin. At some point they asked me to do a transfer for them; which I was trying to do, but as God will have it, my husband felt it and started calling non-stop and called some other family members who started calling all the phones in the house including my children’s phones, which started ringing almost at the same time. Myhusband who suspected that all was not right sent some neighbours who came and kept banging at the gate, which cut their raid short. While they where beating me, I kept praying in all the languages I know. They tied my hand and legs so tight, then two of the men held my neck so tight and where trying to strangle me to death. And when it seemed their hand was not working, they used rope to tie my neck and kept strangling me. While they were doing that, I had made my peace with God, said my last prayers when something miraculous happened. I was knocked out for some seconds, my breath ceased but I was still conscious. How I got the energy to do that I can’t explain, and when that happened they thought I was dead. They raided the house, made away with phones, tablets, money, ATM and some valuables, and ran away.

Lady recounts how her gateman attacked her family, strangled her, demands N30 million

When I didn’t hear noises again, I got up, untied my legs, ran down stairs and locked the door, went to my children’s room and found them under the duvet. My daughter got a knife, cut those ropes and immediately we started hearing banging at the gate. I rushed and asked who it was, and it was my neighbours. The moment they opened the gate, I slumped and they rushed me to the hospital.

Honestly, it was so horrible and the trauma is something else. Please keep us in your prayers. God showed me mercy and preserved my life. If my body is filled with lips, it’s not enough to thank you dear Lord.