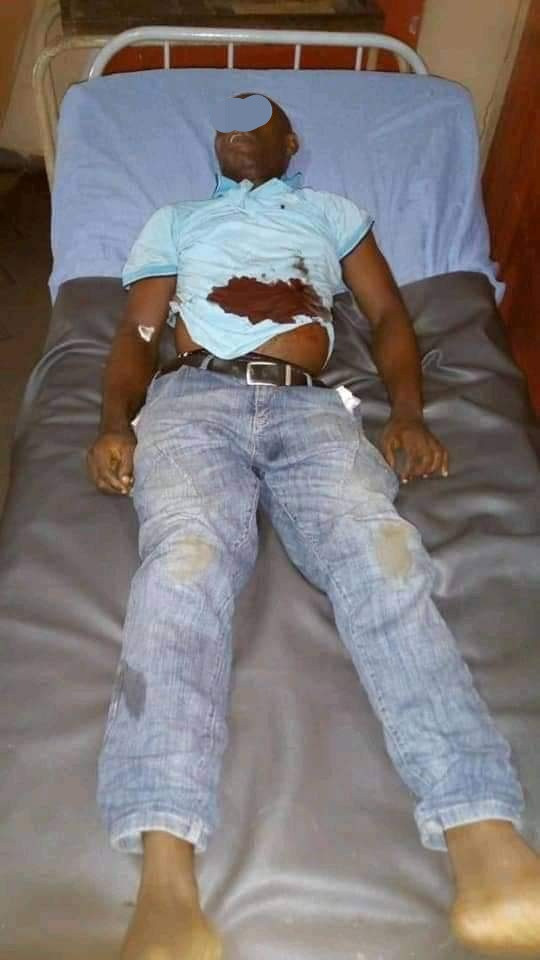 Policeman shoots Abia Revenue Officials, kills one, another severly wounded. There was tension in Aba, Abia state, on Tuesday, July 7, after a policeman shot and killed an Abia revenue taskforce official and wounded another.

According to eyewitness reports, a policeman attached to Crunches, a fast-food restaurant, opened fire on members of Abia State Taskforce Board of Internal Revenue.

A member of the taskforce identified as Ifeanyi Kalu was killed instantly while another person was seriously injured, causing others to run for safety.

An eyewitness said trouble started when a driver of the fast-food restaurant (Crunches) called policemen that their bus has been driven away by the taskforce.

Policemen allegedly arrived with “AK-47″ and” they started shooting sporadically”. A bullet hit Ifeanyi Kalu and another man.

The eyewitness adds: “Both of them have been taken to the hospital. Many people are running for safety and the Crunches office has been shut down.”

Ifeanyi Kalu’s death has reportedly led to a great pandemonium in the state.

Magu denies all allegations against him, says he’s innocent

‘Save my Life’ from Olawale Abideen: Abdulrahman Aliagan the Newly elected National Sec. NGIJ cries out to IGP, DG DSS

Obaseki, is a performer, with over 3, 000 projects awaiting commissioning – Edo PDP chair

I will henceforth fight back every organized attack against me – Magu

FirstBank Offers Support To SMEs In Education Sector Through The Pandemic

FG to evacuate stranded Nigerians in France, other European Countries

#Edo2020: Obaseki gets full support from Oba of Benin, despite attack to discredit him

Osinbajo urges Nigerian youths to be Pro-active amid COVID-19

Magu’s probe is a plus for Buhari’s administration – Malami

3rdMainlandBridgeClosure: Inline with the repair, concrete barriers is put in place

AfDB approves $138M as COVID-19 support for Madagascar, 3 others

#Nigerstate: Eid-El-Kabir prayers to hold at Juma’at Mosques, celebrations on a low key

COVID-19: Nigeria gets 7 tonnes of hydrochloroquine from India – SGF Boss

RE: All Police officers involved in the viral video of sexually harassed female suspect Identified, 2 arrested

Open letter to Femi Gbajabiamila: Pass ‘Vote of No Confidence’ on Akpabio Now

PMB to present 2021 budget to Senate before end of September

Gbolahan Lawal, Oniru of Iru Kingdom, Epitome of an intellectual man on the Throne

FG commends Osun government for reviving Agriculture in the State

Amid COVID-19 Lagosians faces a suffering and smiling situation, as Sanwo-Olu approves 46% hike in bus fare

Just In: Buhari meets with Goodluck Jonathan at the Presidential Villa

Senate President, Lawan assures Ninth Assembly will not be distracted

NigerState: CACOVID-19 Palliatives to be distributed upon completion of supplies

Tukur Buratai reveals 99% of the Terrorists are Nigerians

Firstbank To Hold Webinar On Sustenability Of Educational Sector

#Justice4Izu: Young man commits suicide after being accused of rape, by a socual media influencer

Re- Governor Oyetola and his Covid-19 cover up – Jibola Oyekunle

‘My Governor is a man’ Joy Nunieh after Wike saved her

Trump admits he might lose, if mail-in-ballots option is used for election

Obaseki has no reason to harass anyone, with his huge supporters to PDP – Osagie

Ize-Iyamu is of questionable character, with no good example to lead by -Osagie

FG issues fresh guildlines ahead of scheduled resumption of schools

Oyeyola celebrates Benedict Alabi at 55, describes him as loyal Deputy

Obasa grieves the demise of Tunde Braimoh, ” A Sudden Darkness Overtakes Our Sun”

COVID-19: infections rate is getting worse, WHO warns as world toll hits about 12million

Hushpuppi is not guilty, he made his money from Real Estate deals- Lawyer defends

Maxine Waters slams Trump for his comments on COVID-19, calls him 99% liar

US set to ban TikTok, other chinese media apps for National security reasons

Magu is a victim of power play by Malami – PACAC

Fayemi promises stiffer penalties for violators of gender based laws