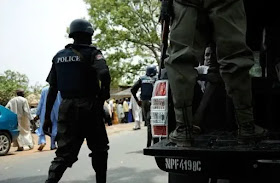 Adamawa State police command, has on Wednesday, arrested one of its officers who allegedly shot dead a motorcyclist who deprived him of a N100 bribe, Nigerianjournal gathered.

The alleged crime occurred at a checkpoint in Maiha local government.

The commercial motorcyclist, Arabo Tambajam, reportedly refused to accede to the policeman’s demand “to settle him with the N100 before he could pass with a container of petrol he was carrying,” a source said.

Confirming the incident, the police spokesman in the state, Sulaiman Nguroje, said the policeman has been arrested and is currently facing investigation.

Mr Nguroje said “Yes the policeman in question Cpl. Richard Zaphet has since been arrested and brought to the State CID.

Reports indicate that shortly after the incident, irate youth in their numbers mobilised and moved to mete out jungle justice on the trigger-happy policeman.

He was, however, saved by a group of soldiers, who also prevented the mob from setting a police station ablaze.

According to residents, the policeman was said to have been deployed from Mubi area command to Maiha.

Meanwhile, the chairman of Maiha local government, Idi Amin, has pleaded for calm noting that justice will prevail over the matter.

Despite public outcry, extra-judicial killings carried out by security operatives, especially the police, usually over refusal to pay bribes is common in Nigeria.

Mr Amin, who had visited the hospital were the young man was taken to before he died, condemned the crime.

BREAKING: COVID-19: Nigeria to get vaccines by February

Who rocked it better? Beyonce or Bisola Aiyeola